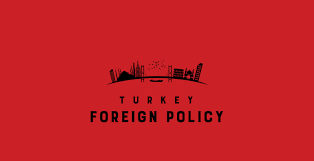 Turkey has been accused of trying to spread political Islam, monopolizing Eastern Mediterranean and meddling in Syria.  Whether these actions constitute a power grab, or are defensive in nature is a topic of great dispute. Burhanettin Duran is a stalwart Erdogan follower and a columnist at pro-government SABAH.  His views on Turkish foreign policy are worth a read to understand how the Presidential Palace perceives the regional dynamics.

Hagia Sophia’s reinstatement as a mosque resulted in a sudden spike in Western media reports about President Recep Tayyip Erdoğan. Needless to say, almost all of those stories were full of accusations and speculation about Turkey’s agenda.

The French weekly magazine Le Point was the latest publication to join the chorus. A photograph of Erdoğan aboard the TCG Kınalıada, an anti-submarine warfare (ASW) corvette, was placed on its cover, which read: “Hagia Sophia, Syria, Libya, the Mediterranean … Erdoğan, war at our gates.”

Le Point’s editorial board appears to have translated French President Emmanuel Macron, who has been bewildered by Turkey’s Libya initiative, into text. By the “war at our gates,” they meant French interests being placed at risk in North Africa and the Eastern Mediterranean. The magazine aimed to portray Erdoğan as “destructive, belligerent and imperial” – as one of their 2019 covers suggested.

Their topics of choice – Hagia Sophia, Syria, Libya and the Mediterranean – were not coincidental either. Those were the sites of Turkey’s post-July 15 foreign policy moves – along with Hagia Sophia. All those issues reflect Turkey’s claim of independence and active agency in the international system over the last four years. Western media outlets have been calling Erdoğan an Islamist, a neo-Ottomanist, an authoritarian and a “sultan” since the Davos moment in 2009. Those labels became more commonly used after 2013, and reached a whole new level after 2016.

Erdoğan’s critics account for his emergence as an active leader in the international system through his rhetoric and new initiatives, with a “yearning for empire.” They sometimes talk about Turkey, once a secular, democratic and Western nation, turning into an Islamist, authoritarian and Oriental country. Other times, they attempt to fuel ideological polarization by referring to revanchism against the Republic and Mustafa Kemal Atatürk. All of those labels are merely intended to sentence Turkey’s newfound agency. After all, European governments must watch what Turkey is saying and doing with regard to various issues now. The European Union’s members are appalled by this new Turkey. They cannot terminate Turkey’s membership talks, threaten sanctions or offer the Turks more money.

Anti-Turkish groups within the EU nowadays fuel an Ottoman fear, which we imagined to be an exclusively Greek obsession, and threaten to punish Turkey. People like Josep Borrell, the EU’s minister for foreign affairs, who are still in touch with reality, highlight shared strategic interests by ruling out fresh crusades. There are many areas where Europe could cooperate with Turkey by redefining this ever-meaningless alliance: refugees, counterterrorism, energy, Syria, Libya, the Eastern Mediterranean, North Africa, NATO, Russia, etc.

It is unfair to describe the Justice and Development Party’s (AK Party) 18-year-old government and the People’s Alliance’s four-year history as a yearning for an empire. The age of empires is long gone. This is the time of strong nation-states rising. Global and regional turbulence clearly force Turkey to embrace fresh military activism. For the record, Turkey was the last country to become militarily involved in Syria, Iraq, the Eastern Mediterranean and Libya. The country has no expansionist or imperial agenda in any of those places. It merely seeks to protect its national security interests proactively. In response to military impositions to undermine diplomacy, Turkey resorts to hard power for negotiation purposes.

So what are the reasons behind Turkey’s new activism? The emerging power vacuum in the Middle East and North Africa due to the U.S.’ withdrawal. Turkey’s Western allies abandoning Ankara and forcing it to work with Russia in the Syrian theater. Washington’s decision to arm the terrorist organization YPG/PKK, and the EU surrendering to Greece and France’s maximalist objectives.

There is no shortage of regional players turning to activism to fill that power vacuum. Notwithstanding Iran’s 40-year-old policy of ideological expansionism, Russia has been at the forefront in recent years. The Kremlin is preparing to set foot in Libya, after Syria, to dominate North Africa. At the same time, with the Armenian attack on Azerbaijan, it adds a new link to the chain between Syria, the Eastern Mediterranean and Libya. Meanwhile, the United Arab Emirates (UAE) plays a destabilizing role in Yemen, Libya, Tunisia, Morocco, Mauritania and Somalia – as dictated by Israel’s Middle East policy.

Either way, the strong nation-state promises to be our neighborhood’s top reality for a long time.