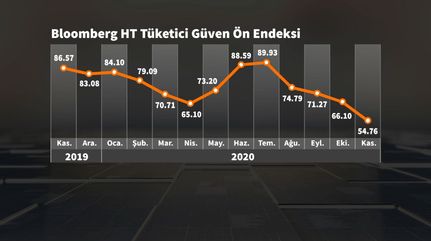 Bloomberg HT Consumer Confidence Preliminary Index fell 16.52% in November compared to the final index of the previous month, reaching the lowest value since September 2015 with 54.76.

The notable retreat owes to the increasing trend of the pandemic, extreme TL weakness and the rise in the interest rates.

The details show that along with the huge deterioration in Turkish consumers’ confidence, the former Treasury and Finance Minister’s claims of a strong V shaped recovery just goes down the drain.  The strong push for the sake of securing a strong rebound from Covid-19 contraction created an unbalanced growth.  It raised the inflation, widened the current account and the fiscal deficits and melt away FX reserves; the by-product of wrong policy implementation.  Now with further monetary policy tightening and perhaps more fiscal measures to be implemented, Turkey’s GDP growth for 2021 is set to be weak.

As noted by Bloomberg HT, the index survey was conducted between October 27 and November 12; hence not largely covering the period when changes for the Central Bank Governor and the Ministry of Treasury and Finance post were made.  It means that how such profound changes are perceived by consumers is not included in November’s strong dive.

As for the details, the Bloomberg HT Consumer Expectation Pre-Index decreased by 10.28% compared to the final index of the previous month and reached the value of 67.96.

On the other hand, Bloomberg HT Consumption Tendency Preliminary Index, which aims to measure the suitability of the current period for the purchase of durable consumer goods, automobiles and housing, decreased significantly by 26.43% to 33.06.