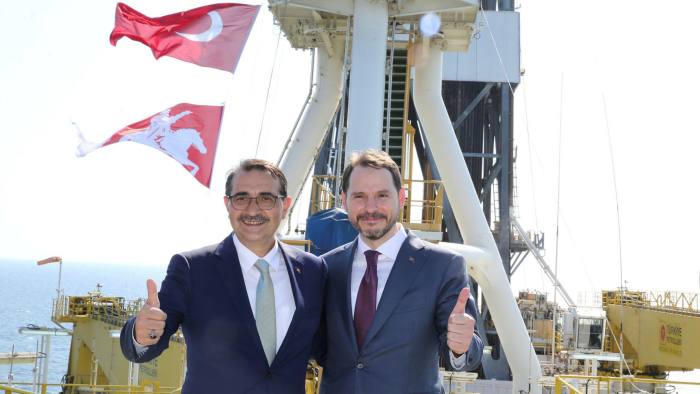 Turkey’s President Erdogan announced with great fanfare a potential natural gas field of 320 billion cubic meters in Black Sea.  Technical details are emerging only slowly, with Turkey’s state owned Turkish Petroleum Corporation (TPAO) stated in a press release that “Tuna-1 well data and geophysical studies show a potential of 320 billion cubic meters of lean gas which represents the largest discovery in Black Sea. There is also an expectation of additional upside potential down at the undrilled section of the well”.  Just how much of the reserve can be developed and what is can be worth to Turkey are questions which can’t be answered at this point.

Turkey’s Energy Minister Mr Fatih Dönmez priced the discovery at $65 bn over the life time of the well, which in the absence of adjunct fields, would be extracted over 7-8 years.

purchased in 2018 by TPAO. Entire block is 7000 square kilometers. The well, which

According to detailed Tuna-1 data collection and geophysical studies, the prospect

Exclusive Economic Zone and entire Black Sea. This exploration success will give a

produce first gas by 2023. This exploration success confirms the outstanding

units for generating and evaluating ultra-deep water prospects, utilizing state-of-the-art technology. Indeed, there is still an expectation of additional potential at the deeper section of the well, as well as the unexplored surrounding part of the Block. Therefore, this day will mark a new beginning for TPAO and Turkey.’’

“This is an estimate based on just a discovery well that will need to be confirmed by further drilling of appraisal wells,” said Ashley Sherman at Wood Mackenzie, according to Financial Times.

“I suspect five years is the best you can hope for,” Mr Lamb said. “They may be able to attract an international oil major as they have essentially a captive market for the gas sales, but the tone around this discovery is very nationalistic so I suspect they may try to go it alone.”

Global Wonks:  Only a “possible reserve”

“Economically speaking, the wellhead break-even point will be around 6-8 USD/MMBTU, similar to Romania’s Trident and Neptun fields.

Firstly, 320 bcm is the Possible Reserve, which means that the possibility of extraction is 10% according to SPE standards”.

Turkey says it’ll tap 320bcm of gas starting in 2023. Extracted over 10 years at a price of $2.3 / MMBtu (futures pricing now), it would improve the gas trade balance by about 0.3% of GDP. Not a game changer assuming this back of the envelope calculation is roughly ok.