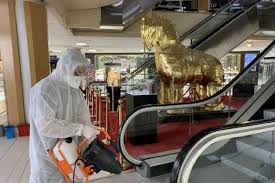 Turkey’s leading  retailing franchise association United Brands Associations (BMD) reported that a revival was observed in the brick and mortar stores’ sales, while a horizontal trend continued in shopping mall stores. BMD President Öncel stated, “Our members are looking for a route in terms of keeping their stores open or closed. Recently, we observe that the negotiations for closing shopping malls have been increasing”.

BMD has taken the pulse of the retail industry with the surveys conducted among its members.

According to the survey conducted with participation of 132 member companies, 62 of which are ready to wear garments and 23 footwear, consisting of 335 of 423 brands that the association embodies, the increase in e-commerce in e-commerce turnover continues, while street stores revive and shopping mall store sales remain the same.

BDM President Sinan Öncel, whose views were included in the statement made on the survey, stated that 4 months have passed since the full normalization of the economy as of the end of September.

Although increase in online sales is a positive development, the majority of our brands’ turnover still comes from shopping malls and brick and mortar stores. While 27 percent of our members declared that they exceeded 100 percent turnover growth in brick and mortar stores, which was considered as partial revival in September, we see that 41 percent still have not reached 80 percent  (pre-Covid) turnover.

“I have to highlight a point out; Although it has been 4 months since the opening of the markets, 28 percent of our markets still have not reached even 60 percent of their turnover in the same period last year in shopping mall stores. The rate rises to 32 percent among our ready to wear garments brand members. Desire of our members is to keep the stores open, whose turnover cannot even cover rent and personnel expenses, is decreasing day by day. To be more precise, our members are looking for a way to keep their stores open or closed. As a matter of fact, we see that the negotiations for the closure of shopping malls are increasing.”

Sinan Öncel stated that while the 12-month CPI was 11.75 percent as of September 2020, there was no recovery in the ready to wear clothing retail, although the increase in clothing and footwear prices remained at only 6.91 percent.

Öncel said, “In August and September, ready to wear clothing prices fell. Despite this reality, the fact that there was no significant increase in store turnover shows that the problem is bigger than expected.”

Emphasizing that it is an important contribution of foreign spending in retail turnover predecessor, last year, 45 million tourists visited Turkey, however 15 million is the most optimistic estimation for 2020.

Therefore, I want to repeat once more; In order for the sectors negatively affected by the epidemic to survive, there does not appear to be a fairer option than the introduction of turnover rent in stores whose turnover was below 80 percent last year. Because when we calculate inflation and the increase in rent, the loss in a store that cannot accomplish 80 percent turnover, reaches 35 percent. Shopping mall managements try to carry out the process with monthly arrangements, but this situation forces brands that do not have bargaining power. As BMD, we have determined this issue as our priority. We would like to draw the attention of our interlocutors once again for a very urgent solution to this problem, which also threatens employments in organized retail, where mainly young adults work.”