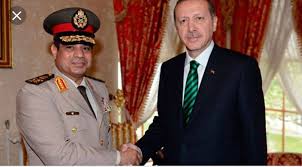 Once close friends, both at sate and national level, Turkey and Egypt turned into biter enemies, as General Sisi deposed Turkish President Erdogan’s co-ideologue Mr. Mursi. Both gentlemen have a fondness for the Islamic charity, or terror organization, according to some, the Moslem Brotherhood. Sisi accuses Turkey of galvanizing Moslem Brotherhood resistance to his rule, as well help it by offering safe sanctuary to its members.  The animosity escalated from personal level to a serious matter of clashing national interests, as Turkey supported Qatar during the Arab Quartet’s assault to crash its economy.

Finally, Turkey’s alliance with Libyan Government of National Accord resulted in a bitter defeat for the rival of the latter, General Hafter, who is currently trying to defend oil port city of Sirte. Egypt passed a resolution authorizing President Sisi to dispatch the military across the border to stop the GNA-Turkish advance.  In a new development, Turkey’s state-owned Anatolian Agency news service claims Egypt sent soldiers to Syrian Province of Idlib where Turkey and its proxies fight against Syrian Army and Russian and Iranian militia.

Some 150 Egyptian soldiers with light weapons have arrived in Aleppo’s rural areas, and some have been deployed in the city of Saraqib to the south of Idlib, it said.

“If this is true, it means that Egypt has started military stockpiling in Idlib,” security expert Metin Gürcan said in a tweet. “As tensions with Egypt in Libya escalate, the conflict gets closer to our border.”

Turkey increased the number of observation points in the rebel-held province to 38, following the death of more than 30 soldiers in a Russia-backed Syrian government offensive in February. Since then, it has deployed air defence systems in Idlib as it continued to increase its military presence in the province.

Egypt and Turkey are backing opposing sides in the ongoing conflict in Libya, with Egypt on the side of Libyan Field Marshal Khalifa Haftar’s self-styled Libyan National Army, along with France, Russia and the United Arab Emirates.

Turkey supports Fayez al-Sarraj’s Government of National Accord, recognized by the United Nations, and the military officers, weapons and ammunitions it has sent has helped Sarraj turn the tide in his favour.

Egyptian and Turkish intelligence services have intensified their activities in Libya, as Cairo says it is aware of the smallest details in Libya, and Ankara likening its efforts in the country to counter-insurgency measures in the Ottoman Empire.