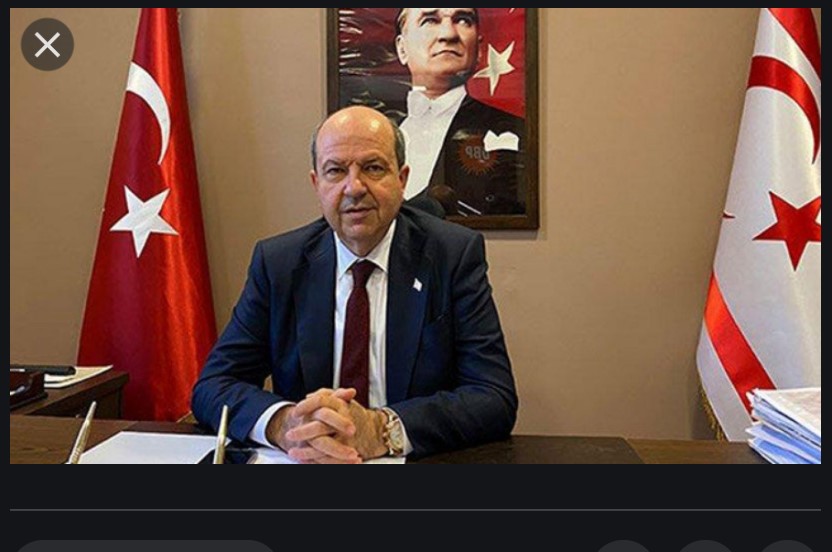 Turkish Cypriot leader Ersin Tatar said Tuesday efforts to resolve Cyprus’ ethnic division should start fresh and aim to achieve a two-state deal, because decades of negotiations for a federation-based agreement have got nowhere.  Turkish Cypriotes view further unification talks as futile, and don’t want to join the Republic of Turkey, either.    EU’s unquestioning stance to support the demands of Greece and Greek Cypriotes is one of the reasons why the 46-year old conflict can’t be resolved by a final peace treaty.

Tatar said a regional “new state of affairs” that takes into account the discovery of significant gas deposits off Cyprus creates the need for a two-state accord, under which equally sovereign Greek Cypriots and Turkish Cypriots can live “side by side.” The Greek Cypriots reject the two-state idea.

Tatar spoke after meeting United Nations envoy Jane Holl Lute, who arrived on the island nation to scope out chances of resuming peace talks that have remained dormant since 2017.

The approach by Tatar, a center-right politician who defeated a leftist incumbent in Turkish Cypriot leadership elections in October, threatens to upend a 1977 agreement for the two sides to negotiate a federation.

Cyprus was divided in 1974 when Turkey invaded following a coup aimed at union with Greece. The island’s internationally recognized government is seated in the Greek Cypriot south. Only Turkey recognizes a Turkish Cypriot declaration of independence in the north.

The majority Greek Cypriots reject a two-state deal or any other arrangement legally sanctioning the country’s division by lending recognition to a breakaway entity.

Lute met late Tuesday with Greek Cypriot President Nicos Anastasiades who expressed his willingness to take part in the conference in hopes of resuming peace talks where they left off in 2017, according to government spokesman Kyriakos Koushos.

Lute will travel to Greece on Wednesday and to Turkey later this month for more talks.

In Northern Cyprus, which is recognised as a state only by Turkey, there has been widespread frustration across the political spectrum with the endless cycle of unsuccessful talks. In a September survey conducted by Greek Cypriot newspapers, 53.8 percent of Turkish Cypriot respondents said they felt a lack of hope and despair over the political situation on the island, as opposed to 24.7 percent of Greek Cypriots. In a February poll conducted by Turkish pollster Gezici Research Company, 78.7 percent of Turkish Cypriot respondents said that they do not believe a deal can be reached with the Greek Cypriot side.

Based on the initial set of treaties that established the Republic of Cyprus in 1960, Turkey, Greece and the United Kingdom are “guarantors” and hold certain intervention rights if the established status quo on the island is upset. Turkey activated the provision in 1974 in response to a Greek-backed coup d’état that aimed to unite the island with Greece. The Greek Cypriot side views the guarantor set-up as outdated and wants it abolished.

Having won the election due to the electorate’s desire for change, Tatar now has to deliver on his promises.

The new president has emphasised the need to raise “alternative models” at the negotiating table and promoted a two-state solution “living side by side in cooperation”. What Tatar probably means is that even though Northern Cyprus is not internationally recognised, in practice there are already two states on the island, and so the talks should proceed based on this reality.

Tatar has also spoken of “sovereign equality”, indicating that he would prefer a greater devolution of power to the Turkish Cypriot side and a solution that takes the shape of a confederation (a union between recognised states) rather than federation. International recognition of Northern Cyprus would require the consent of the Greek Cypriots, who see it as anathema.

At the same time, becoming part of Turkey is not an option for most Turkish Cypriots and Tatar himself has not raised the idea. Turkish-Cypriots are adamant about their unique identity and independence.

The question is now how Tatar’s vision would fit into the established peace process which for decades has worked towards a federal solution, laid out in the High-Level Agreements of 1977-1979. They gave rise to the idea of a bi-zonal, bi-communal federation composed of two constituent states, a single international entity, and political equality between the two communities, though the two sides have consistently failed to achieve a final comprehensive settlement.

Apart from the disagreements of the Turkish and Greek Cypriots, the Cyprus Problem is also complicated by the interests of the various players involved. Turkey, Greece, the UK and the UN have all been part of efforts to resolve the Cypriot Problem since the beginning.

The EU became involved in 2004 when the South joined the union, without the North following the failed Annan Plan referendum, in which Turkish Cypriots (with Turkish support), voted yes and the Greek Cypriots no to a UN proposal to reunite the island.

One of the thorniest issues associated with the Cyprus Problem is the natural gas discoveries off the island’s coast, which has further internationalised the issue. Potential commercial development pathways, disputes over future revenue sharing, and overlapping maritime boundary claims (owing to the fact that Turkey does not recognise the Greek Cypriot-led Republic of Cyprus) have drawn into the dispute numerous other regional actors, as well as international oil and gas companies.

Wider regional spats between Turkey, France and the United Arab Emirates have seen the latter two conduct military exercises in the region. The United States had also recently overturned a long-standing arms embargo on the Greek Cypriots.

Although the natural gas issue has never been formally discussed in the negotiations, it has become a major source of animosity, mistrust and tit-for-tat moves, hindering the peace process. As former UN Special Adviser Espen Barth Eide has pointed out, “the hydrocarbons issue has now been linked to the Cyprus Problem … it cannot be unlinked.”

Even if some progress is made on the natural gas issue, the traditional stumbling blocks in the negotiations process remain. The UN-sponsored talks revolve around six areas: property claims, possible territorial concessions, federal power-sharing agreements, security guarantee arrangements, EU relations and economic matters.

The negotiations have been based on the principle that “nothing is agreed until everything is agreed”. This means all six files have to be closed together in a final comprehensive agreement and any partial agreement today on a particular subject cannot be finalised. This has encouraged the sides to wait for favourable developments that strengthen their hand at the negotiating table, thus drawing out the process.

Official state-to-state cooperation between the South and the North has been avoided for fear of “normalising the division”, giving the North a degree of recognition and removing incentives to compromise.

Instead, local bi-communal technical committees cooperate over matters such as cultural heritage restoration, tracking down missing persons from the war, and more recently, public health. Such engagements have had little influence on the core parts of the settlement talks mentioned above.

At present, the UN is now preparing to resume the negotiations. The EU has backed the move, asserting that it is “of vital importance that the UN-led efforts for the Cyprus settlement are launched as soon as possible”. Tatar has also announced a multilateral conference to be convened by Ankara, although it is unclear if the Greek Cypriot side would agree to it.

Though there has been a long history of failure and despair in attempts to resolve the Cyprus Problem, hope, however faint, remains. The parties did, in fact, come close to a solution in 2017, where Turkey, in particular, had purportedly shown willingness to compromise on the issue of security guarantees through a significant reduction of its troops in Cyprus. Though Tatar himself has promised not to forego Turkish security guarantees on the island, the Turkish offer may still stand.

However, the  Greek side has little incentive to compromsie on issues vital to Turkish Cypirotes such a limit on Greeks moving to Turkish-majority cantons and full power sharing.