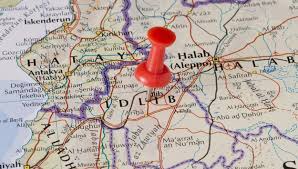 Life at the North-West corner of Syria, Idlib, has become hell for ca 4 million residents, most of whom are refugees from Assad’s oppression.  As Russia, Iran and Assad pressure the province to push the fundamentalist militants and legitimate opposition brigades to Turkey, Turkey and her proxies are reigning fire on the rivals.  A Russian brokered cease-fire is only spottily observed.  The war-torn province is now in the midst of terrible corona outbreak, which will exacerbate the human misery in the approaching winter, as well as straining Turkey’s resources further by raising the demand for medical supplies, food and shelter.  Syria Relief, the UK’s largest Syria focused NGO, have declared the situation across the whole of Syria at “emergency” levels and have called on international governments and actors within the conflict to take immediate action to attempt to stop the crisis worsening.

It is with great regret that we at Syria Relief have been forced to officially declare the COVID-19 situation in Syria an “emergency.” We are today calling on urgent support from international governments and donations from the general public to help fight the spiralling crisis. We are also calling on all actors within the Syrian conflict to direct resources away from fighting and towards providing medical support for the victims.

The deliberate tactic used throughout this conflict to destroy hospitals and kill medical workers has left Syrians vulnerable to impacts of this pandemic. So for, during the conflict, over 40% of Syria’s healthcare facilities have been destroyed or damaged. Numerous Syria Relief hospitals and clinics have been targeted and we have had healthcare staff killed in recent months. This had led to a lack of medical infrastructure, particularly in the Northwest and Northeast. In South of Syria especially, it is believed that the real number of Coronavirus cases is exponentially larger than the official cases due to a lack of transparency and testing capacity.

Our colleagues at WorldVision reported this week that the number of cases in war-torn Idlib and the rest of Northwest Syria, confirmed cases have increased by 1,300% in a month. We are hearing reports of some hospitals inside Syria closing their door to suspected COVID cases to protect other patients, people being unable to afford a COVID test and others fearing of the consequences of going to official healthcare facilities.

Today, we are calling on the UK government and all governments to:

As of 24 September,  the latest official data for which data was made available, there were 760 confirmed cases in northwest Syria – all analysed at the only medical laboratory in NW Syria – some 35 per cent of which were health care workers. This is compared to the 3,765 confirmed cases in regime-held territory, recorded up to 19 September.

Ahmed Idrees, who works for the Takaful Al-Sham charity and is based in Aleppo Province, stated that beyond the camps the death and infection rate from coronavirus in opposition-controlled areas is still very low.

“The liberated areas are closed and isolated from the surrounding areas,” he explains, “which reduces the severity of the entry and spread of the virus.”

“The region here is isolated from the outside world. There is an absence of airports, trains and crossings with other countries which helped delay the arrival of the virus to the region.”

However, he is afraid for what is to come: “The population density, congestion in the camps and the absence of international organisations concerned with fighting the virus make us anxious about its spread.”

As winter approaches in one of the top, most at risk parts of the world, cases are going up.

Chamsy Sarkis, who recently conducted a study into coronavirus in northwest Syria, told Bawaba in August: “If there was a virus outbreak in 10 to 20 of the camps out of 1,000 that are spread across Idlib alone, the health care system would collapse in weeks.”

Syria at large is becoming a hot-bed for Covid-19, as authorities set up a  temporary hospital for Covid-19 patients at a Damascus sports complex in preparation for what an official said was a possible second wave.

The facility at Al-Faiha Stadium will operate 120 beds for people requiring oxygen, but has capacity for 100 more.

The health ministry has reported 4,774 cases of Covid-19 and 228 deaths in government-held areas since March. However, experts believe the actual figures are significantly higher.

Turkey-occupied city of al Bab has been declared an   infected zone after it recorded 460 coronavirus cases. The health authorities also reported 69 new infections on Sunday in northwestern Syria.

According to Syrian Observatory For Human Rights , the total number of confirmed cases recorded since July has risen to 1,730, including doctors and medics.